Although the technology literacy rate of the elderly is generally lower than the younger generation, elderly are very eager to catch up with the ever-changing technology. While we are developing elderly services with the assistance of technology, we need to consider how to increase digital inclusiveness so as to lower the barrier for the elderly to enjoy the benefits of technology.

Base on the idea of using a robot to facilitate communication that an elderly member had raised during the co-creation workshop, Eureka began designing “Tung Zai”’s appearance and functions at the Action Project stage. Several co-creation workshops were organised throughout the design process to understand the needs and expectations of Centre members and staff towards “Tung Zai”

TWGHs Fong Shiu Yee Neighbourhood Elderly Centre is located at Sau Mau Ping Estate in Kwun Tong. Most of the members are over 70 years old and most of them are female.

During the preliminary research stage, the centre staff reported certain difficulty in communicating with the members about irregularly released ad hoc service information. Since most of their members are not used to using smartphones, online communication and even instant messaging is not completely effective in their case. For most of the time, the good old telephone calls are the best way for both sides to communicate with each other within limited advertisement time. Hence, we believed that an interactive voice response robot can facilitate the communication between the centre and the elderly, creating a new channel for members to receive information. 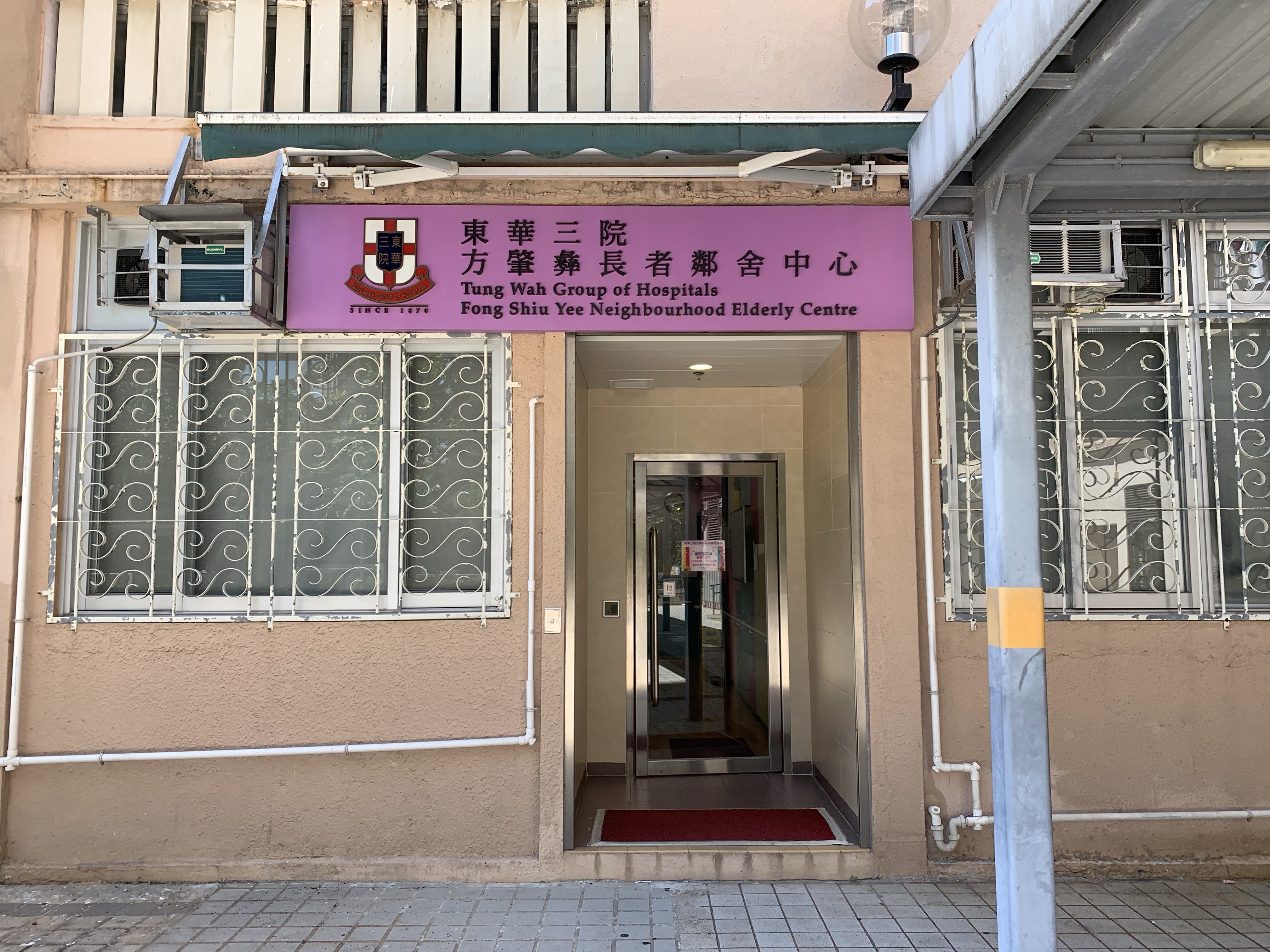 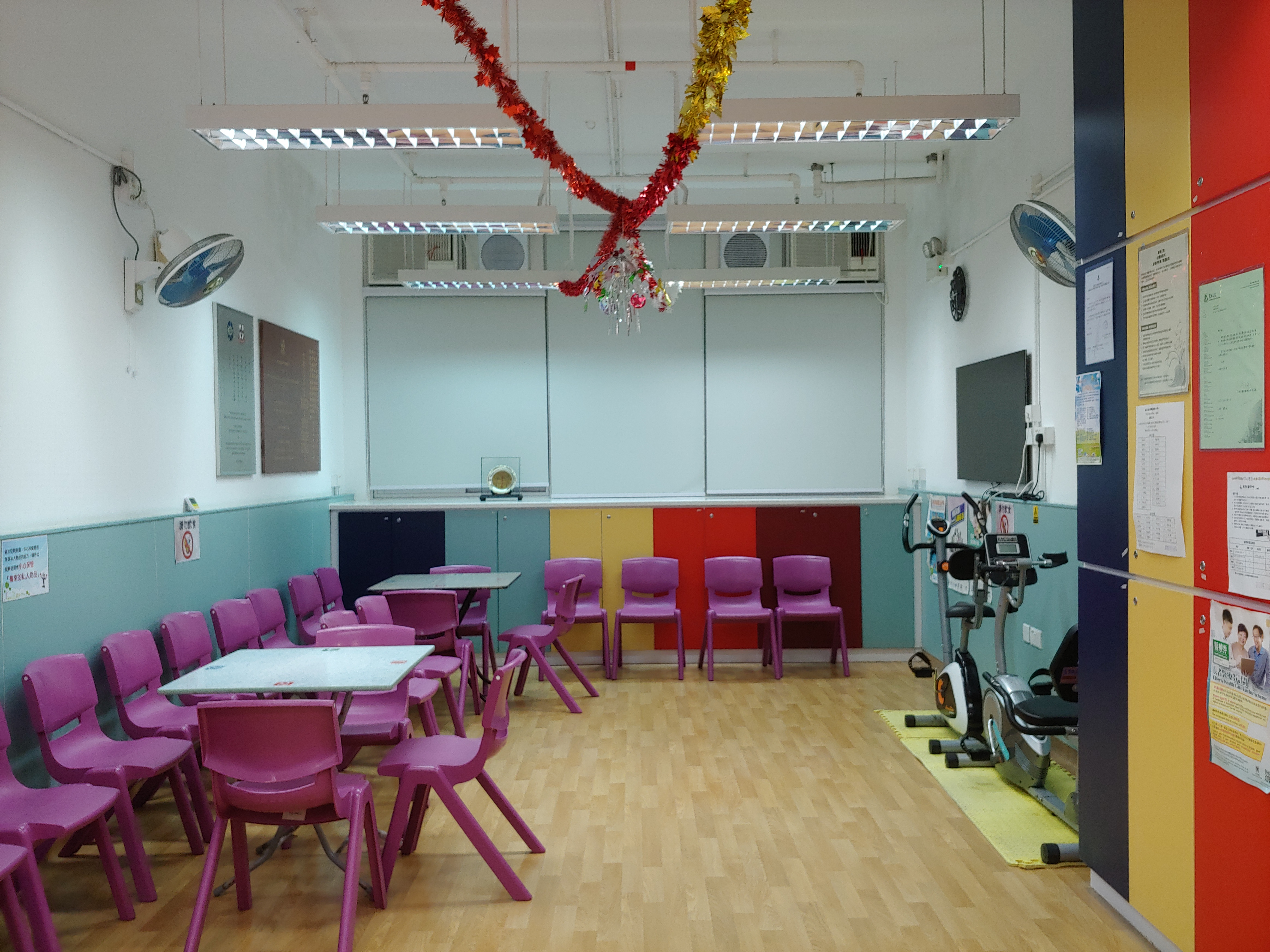 Three workshops were organised on 28 September, 29 September and 19 October 2019, to enable participants to use design thinking strategies to generate ideas and simple prototypes according to the design challenges. Organised by JCDISI, these workshops had participants ranging from Centre Operators (NGOs), Centre Users (Elders) and public participants. The teams also carried out field research, interviewed stakeholders, sent out questionnaires to gather preliminary findings and solutions. 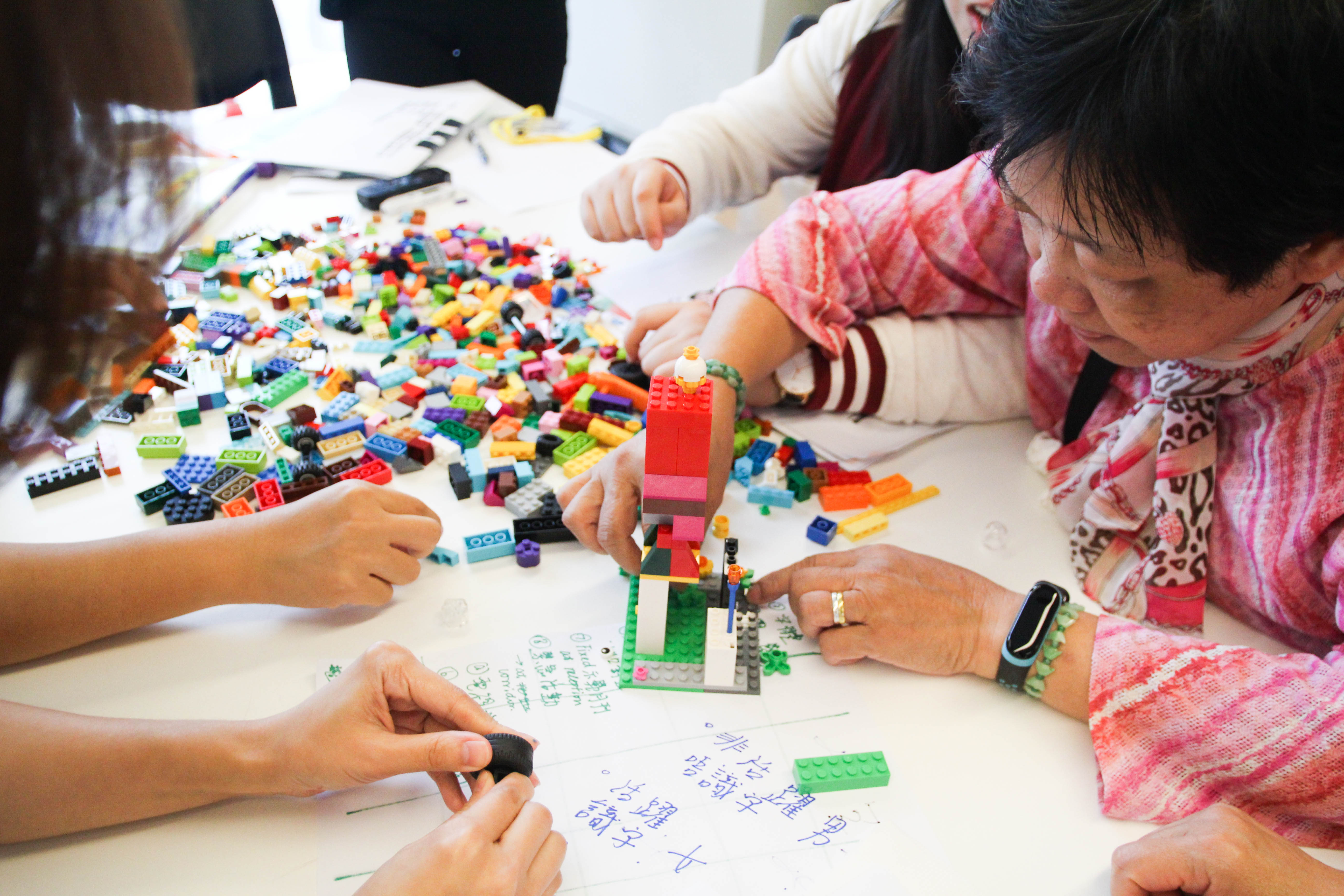 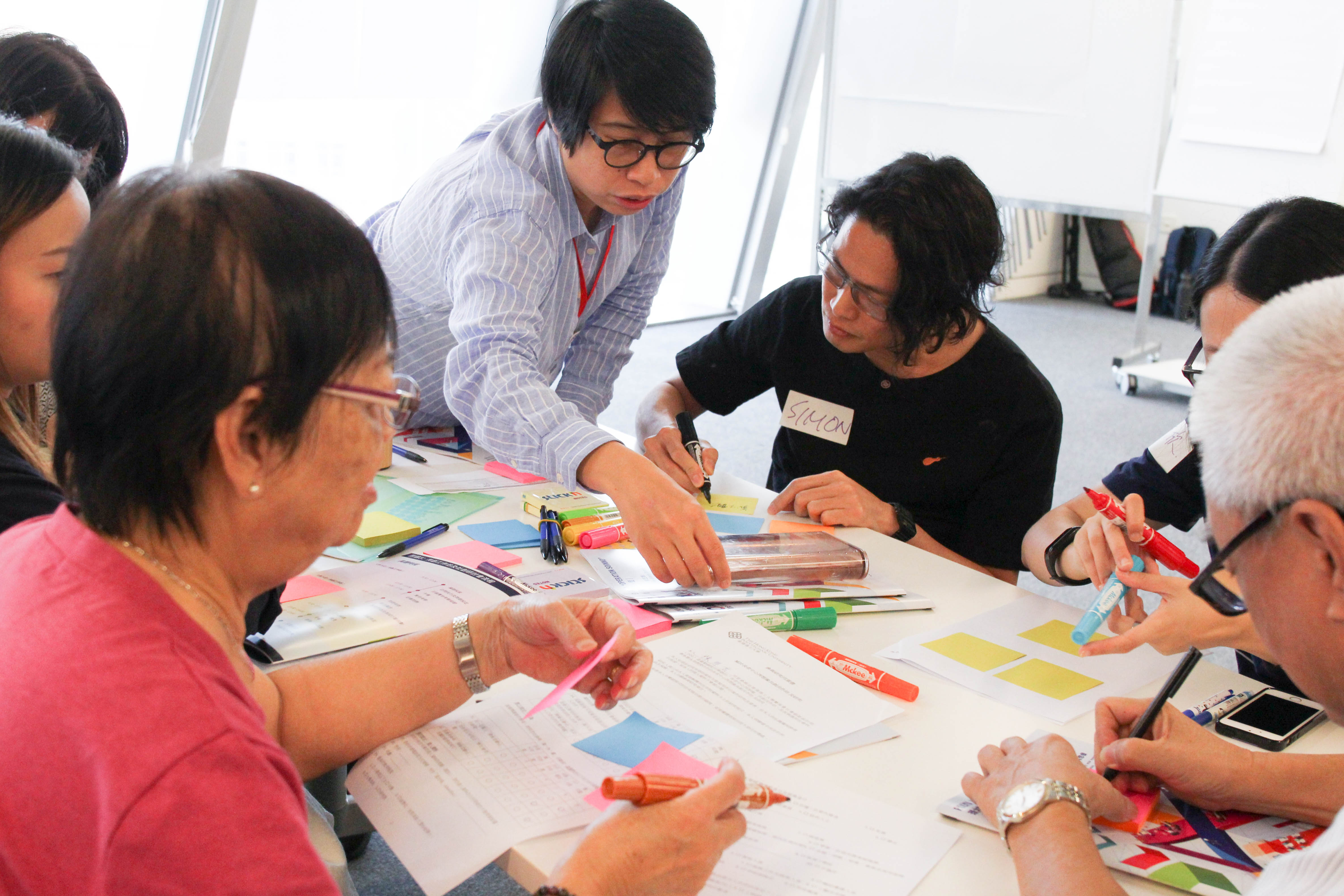 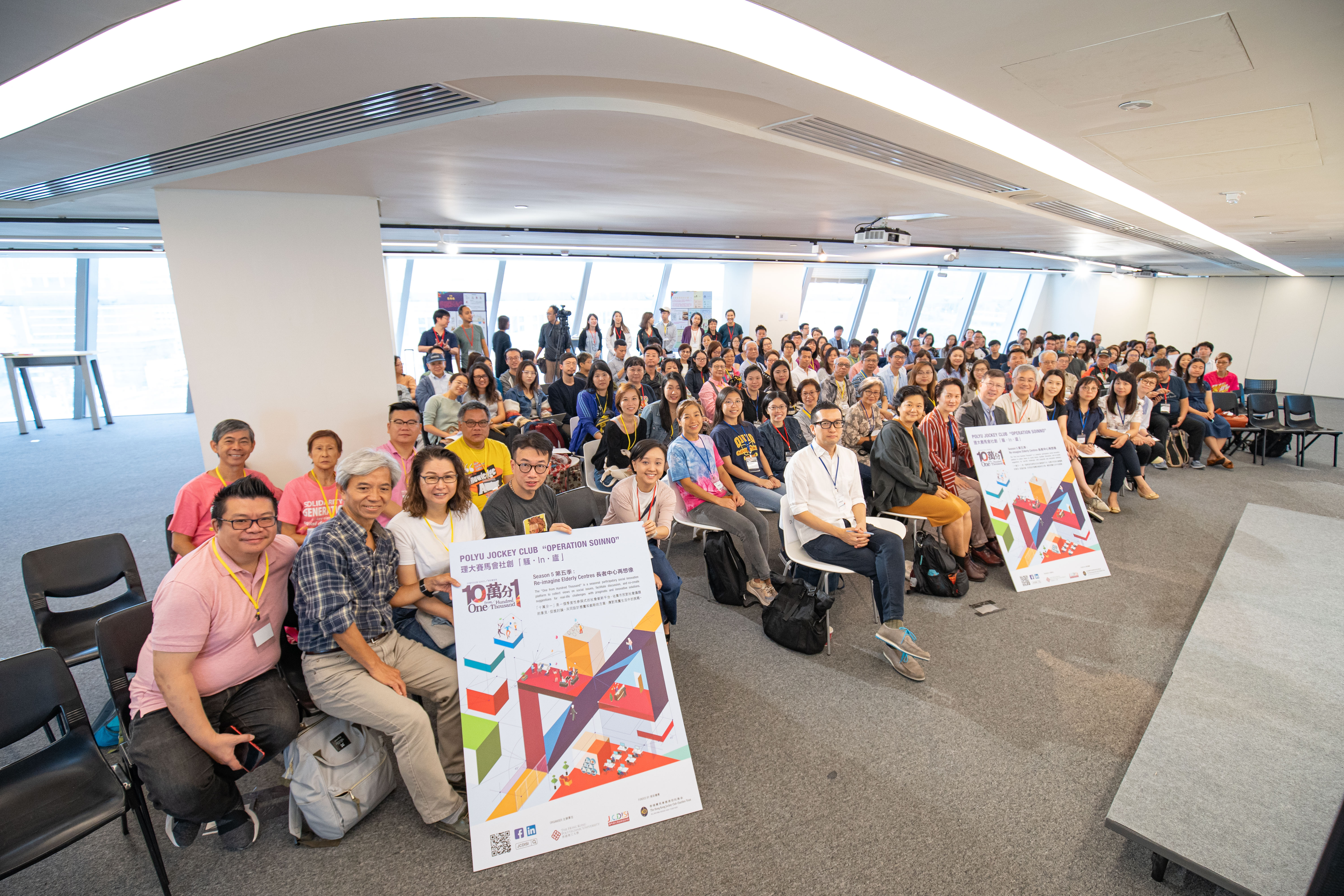 According to the design solution of the co-creation team, the design team further developed the idea and invited Roborn, a tech company specialized in robotic products, and Tints, a manufacturer of personalized products, to join the squad, working together to create the robot prototype

The design team had organised three user engagement workshops. Workshop 1 and 2 allowed the elderly to brainstorm the appearance of Tung Zai, while Workshop 3 focused on elderly commenting on the initial designs created by the designer.

During Workshop 1 and 2, elderly used foams of different shapes and little sticks to create their ideal-looking Tung Zai. They explained their design ideas afterwards, as well as their expectations of Tung Zai in terms of functions.

By analysing the models obtained at Workshop 1 and 2, the design team revealed that elderly expect Tung Zai to be informative, have an optimistic personality, and able to interact with people in multiple ways. The team created four initial designs based on these opinions for further development of the robot.

Workshop 3 aimed to collect comments and interpretations of the four initial designs from elderly, and touch on the appearance of Tung Zai according to the elderly's preferences. Eleven elderly picked their favourite design among the four and explained the reasons behind on Zoom.

Furthermore, the design team distributed 50 sets of questionnaire to the members of the centre so that feedback from more people could be heard. 34 sets of questionnaires were collected and analysed. The results showed that most of the respondents prefer the astronaut design since it associates with kindness with the child look. Afterwards, in response to practical considerations, the design team made adjustments to the design of Tung Zai based on the suggestions from Tints, the product design and manufacture expert, so that the elderly could interact with Tung Tsai safely. 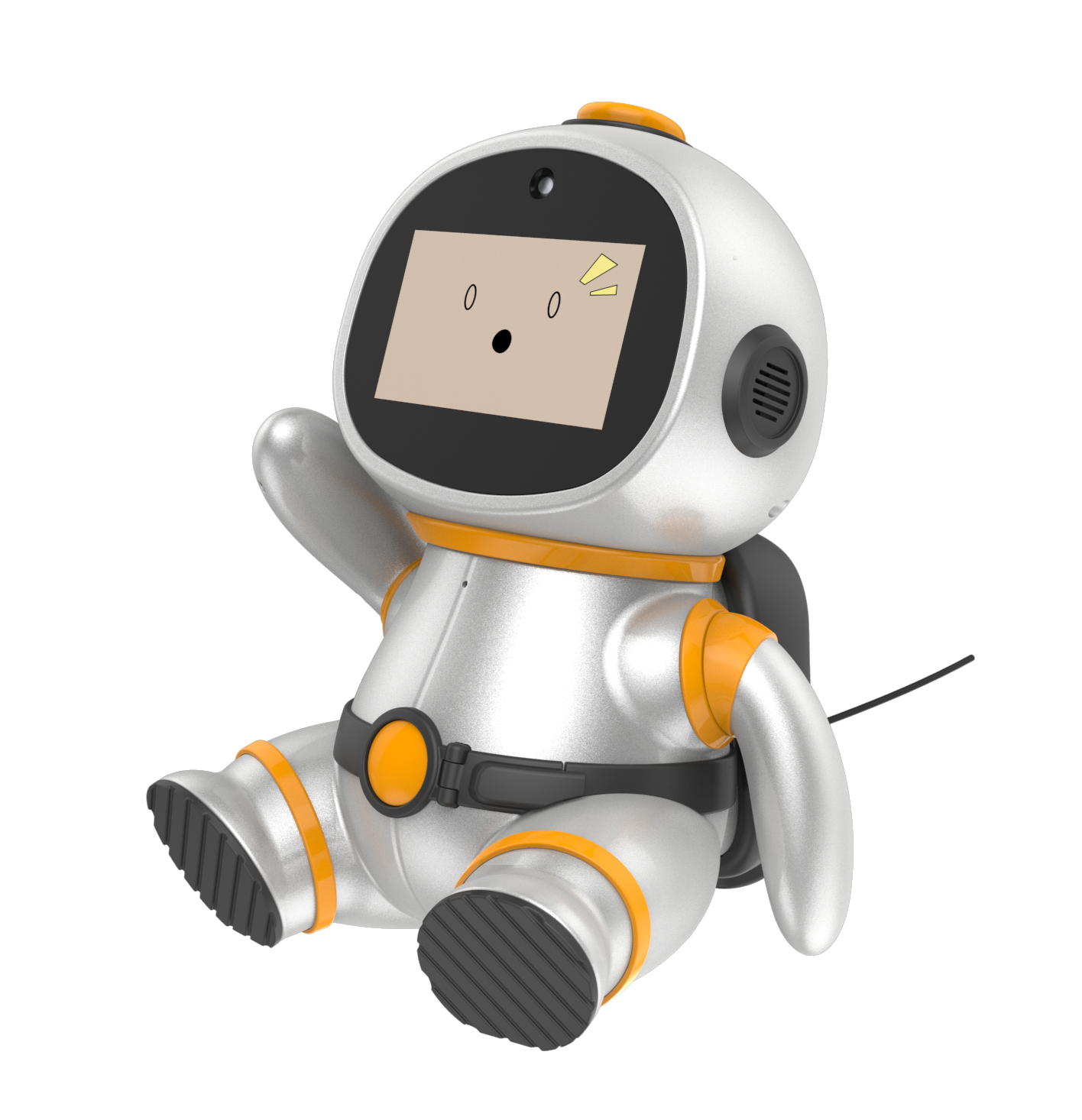 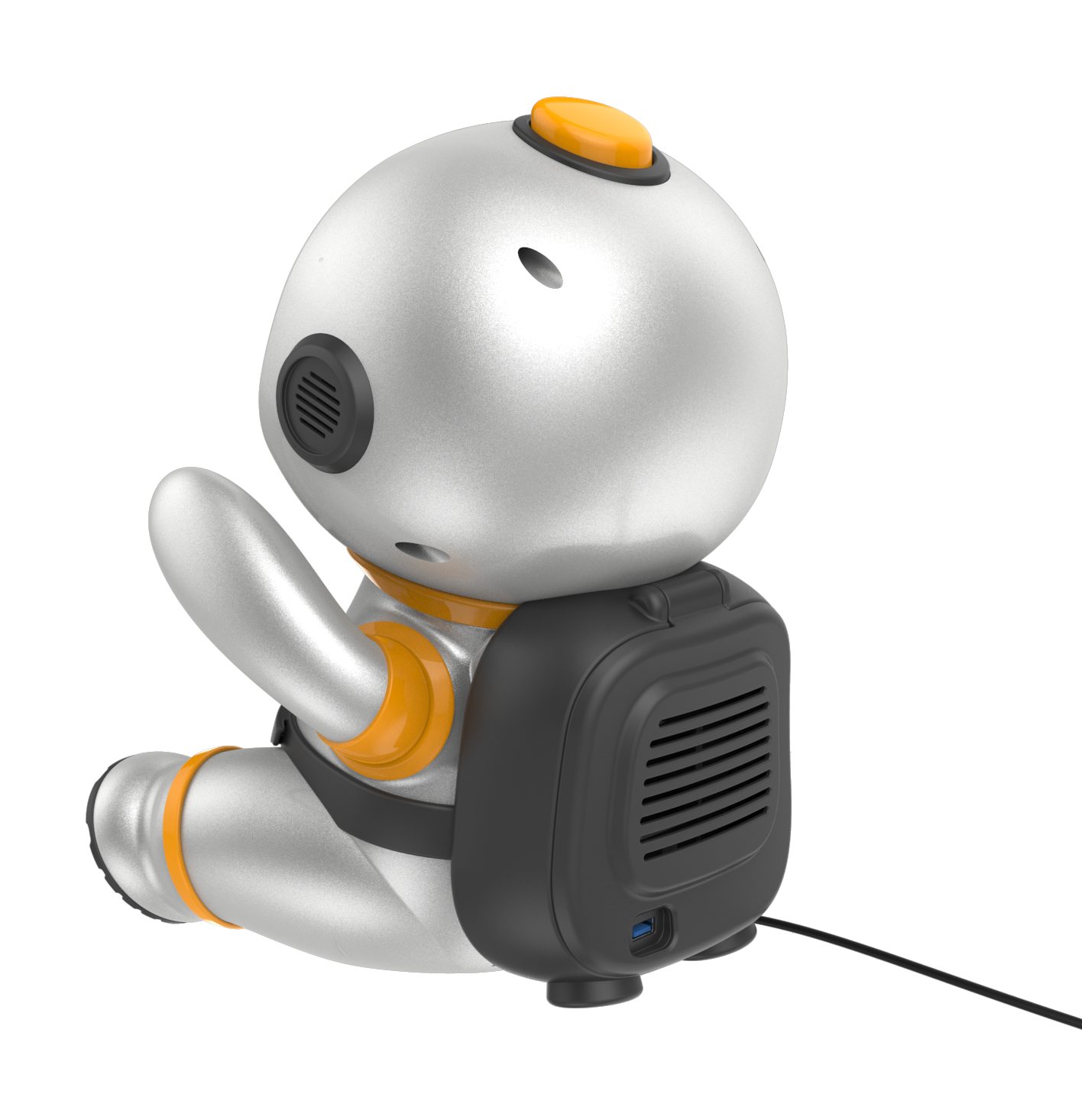 In addition to have elderly engaged in the co-creation process, we also invited the staff from the centre to imagine the functions they would like Tung Zai to perform, spelling out their expectations.

According to the staff at the workshop, it is preferable for Tung Zai to be informative and able to answer questions they usually get from the elderly. Moreover, they would like Tung Zai to cheer for the elderly when they show negative emotions. 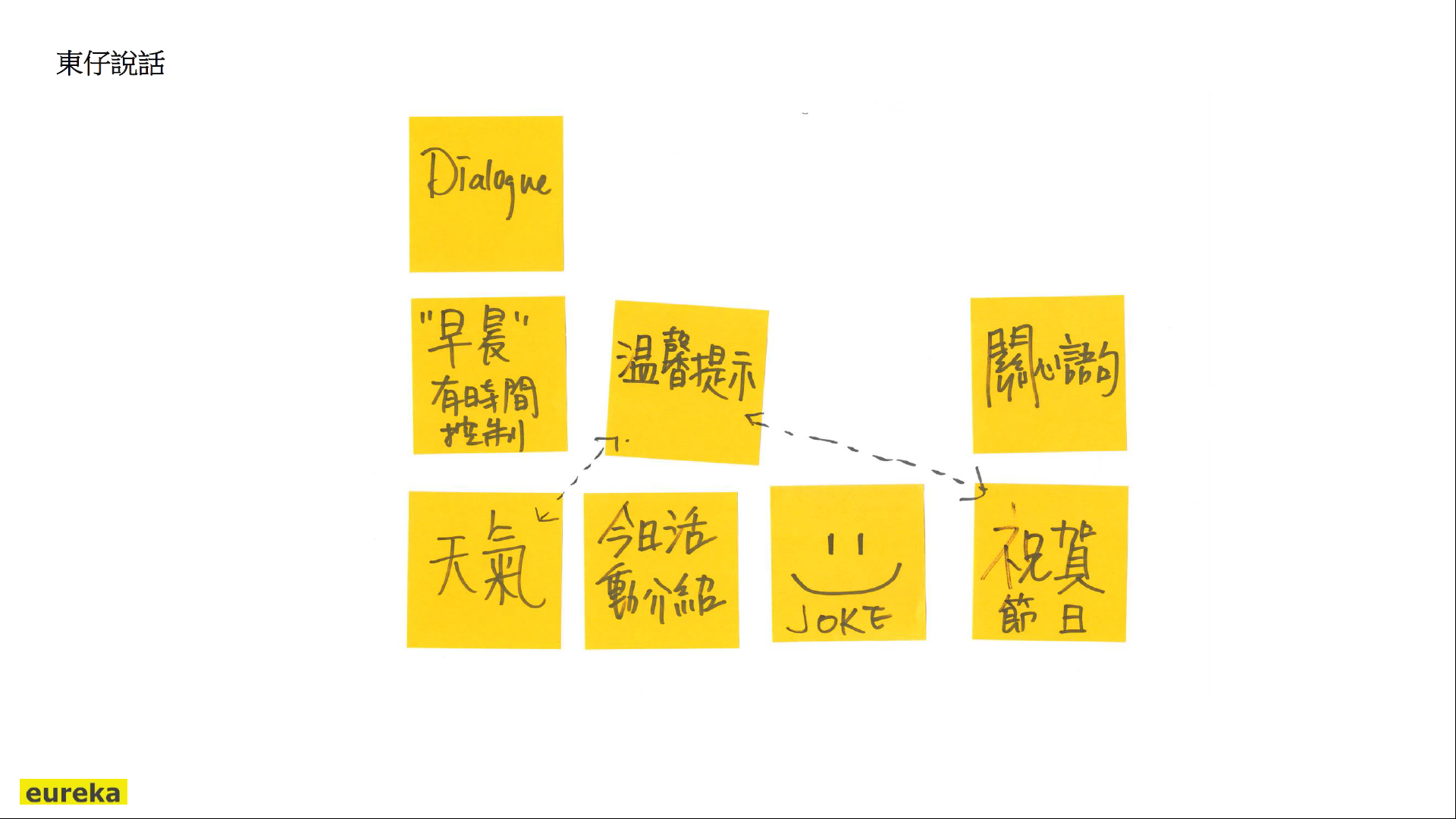 After discussion with the staff, the design decided that Tung Zai would be able to answers topics of the following six areas:

In terms of hardware, the design team took advice from Roborn, the technical consultant, and installed two buttons in Tung Zai. The two buttons have the following functions:

In order to understand whether Tung Zai is functioning as it is designed, a user testing workshop and 2 days of on-site observation were established. Below introduced the details of on-site testing as well as the observed results.

The user testing workshop was set on 12 August 2021 to welcome the centre’s new assistant (Tung Zai) and allow them to get in touch with Tung Zao for the first time.The main intention of the workshop was to introduce Tung Zai to the elderly and to run some usability tests to check if the intended design worked the way it was thought and designed and where it could be further adjusted and improved.

The on-site observation was carried on 19 and 26 August 2021. Due to the pandemic, the drop-in service was suspended. Therefore, the design team can only do the observation during those day with 2-3 pre-arranged activities and interact with the pre-registered elderly members. Two observers were stationed at the Centre to observe and record the elderly’s interaction with Tung Zai before and after they participate in the activities they registered for. 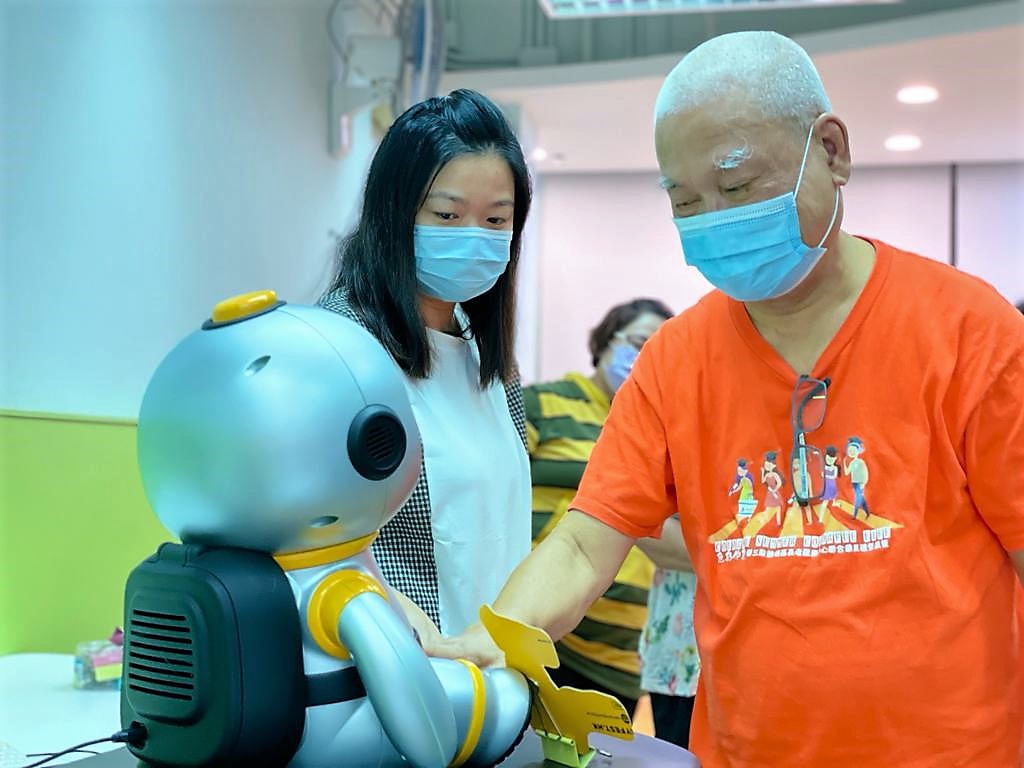 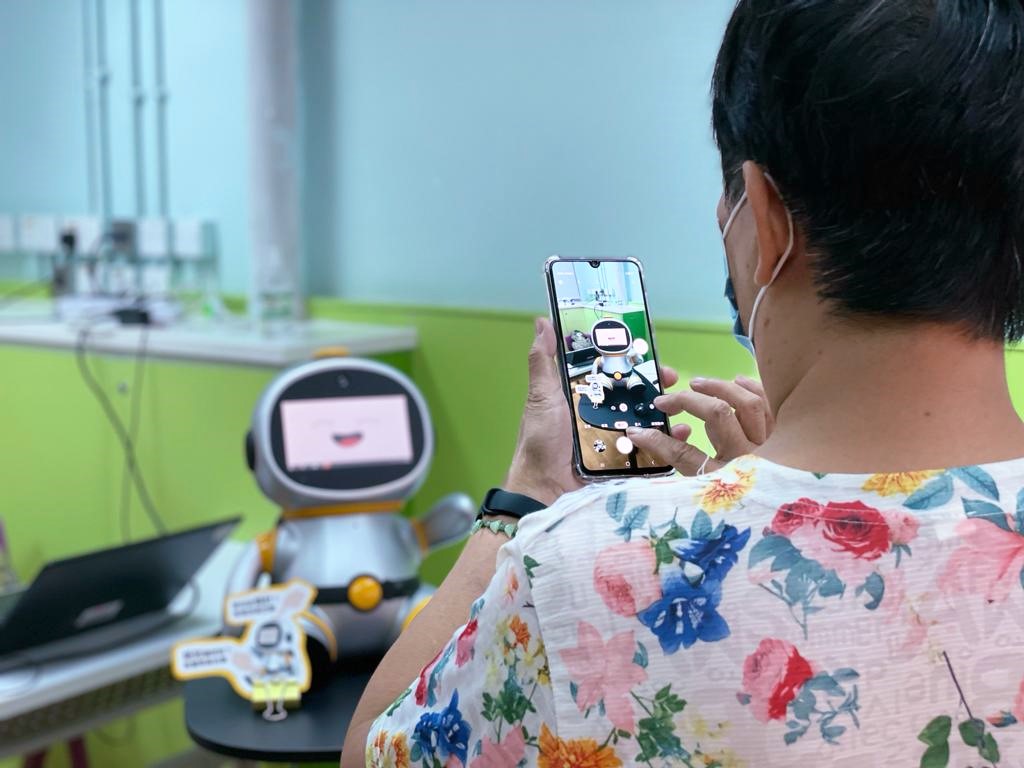 Overall, the elderly were quite surprised when seeing Tung Zai. Some got excited and eager to interact with Tung Zai. However, after the first few attempts, they started losing enthusiasm as they sometimes were not able to communicate with Tung Zai successfully. Below is a summary of possible areas of change and improvement:

During the workshop and observation, we have recorded a number of new topics that can be added to Tung Zai's programme. These topics include: (1) Information about Tung Zai, (2) Health and exercise related information, (3) Notice from the centre, and (4) local touring information.

It is observed that most of the elderly that enters the Centre did not approach Tung Zai and interact with it. We believe that the location when Tung Zai stations may affect the degree of engagement among elderly. For example, settling Tung Zai at the drop-in area where elderly can watch TV during the spare time may encourage more elderly to interact with him.