Meeting with Senior Entrepreneurs episode 3: Creating a career to promote environmental protection through an encounter with earthworms

This is the story of a Guru in Eco Friendly Handcraft, Ms Cat Ching.

Ms Cat Ching started her first entrepreneurship by chance in 2017. She set up a small enterprise that promotes European earthworms as food waste solution in Hong Kong when she was about 60 years old.

Cat initially joined a community volunteer learning team and participated in a low-carbon lifestyle promotion program with other nine volunteers. One of the activities arranged by the organiser was a talk about European earthworms. Cat has developed a strong interest in earthworms since then. She met two other friends who shared the same interest and they teamed up to partake in a competition about creating innovative low-carbon entrepreneurship.

There was a start-up training camp that took place at the Kadoorie Farm - a two-day-one-night camp for more than 20 groups of participants. The participants who did not have their ideas could join other groups to design and create an entrepreneurship. “I met a friend who knew about European earthworms. I learned that earthworms consume food waste and produce earthworm manure as a natural fertilizer.  This concept was innovative and attractive to me.” Cat has always been concerned about environmental protection. She likes to grow plants in her leisure time and will buy organic fertilizers such as chicken manure. Cat said that she honestly did not think about setting up a business at the beginning; she was just interested in the idea that European earthworms might be useful for growing plants.

Before her retirement, Cat was a fashion producer who designed fashion and costumes for stage shows and movies. She also ran a factory and managed more than 60 workers, and occasionally helped customers to alter their clothing. One of the event organiser staff first invited her to join another project which was about designing upcycling clothing. But Cat declined the invitation because she wanted to try something new. She began to get work with the earthworms.

Cat collaborated with two participants she met at the earthworm talk. Together with three other people, they formed a team of six and decided to try out an entrepreneurial project related to European earthworms. Among the team members, Cat was the only one aged above 50; all others were relatively young and some of them had their professional careers. Cat was responsible for conducting the experiments, testing the effectiveness of earthworm manure and promotional tasks.

The project ran smoothly at the beginning. The team met regularly during the first six months. They applied for an import permit from the Agriculture, Fisheries and Conservation Department, and tried to import European earthworms to Hong Kong from farms on the Mainland. One of the team members had bred earthworms for six years and he was familiar with the procedure. As a result, they imported earthworms and produced earthworm breeding boxes successfully.

Before the final competition, the team set up an exhibition stall near the Central Farm Market to sell their earthworm breeding boxes. The response was encouraging. Many passers-by were interested in it, especially foreigners. More than a dozen customers left their contact numbers for them to follow up, and ten breeding boxes were sold at the end.

As a result, the team won the competition and was awarded a prize of HK$50,000.

However, after the competition result was released, internal conflicts among team members surfaced. The partner who was most familiar with earthworms did not want to continue the partnership and asked to split up. Tensions and disagreements existed during the collaboration such as workload allocation, the rules of using funds, profit distribution and personal relationships etc., which made some team members feel uneasy about continuing the partnership. Unfortunately, the team broke up immediately after they started to have some achievements, leaving only four members in the project.

But what surprised Cat, even more, was the procedure of receiving the prize. They need to carried on with the project with the award seed money. Cat said that she honestly did not enter the competition for the prize and thus did not pay attention to the conditions and terms set by the event organiser. In the competition of creating innovative low-carbon entrepreneurship, the evaluation criteria included innovation, feasibility, and teamwork, etc. 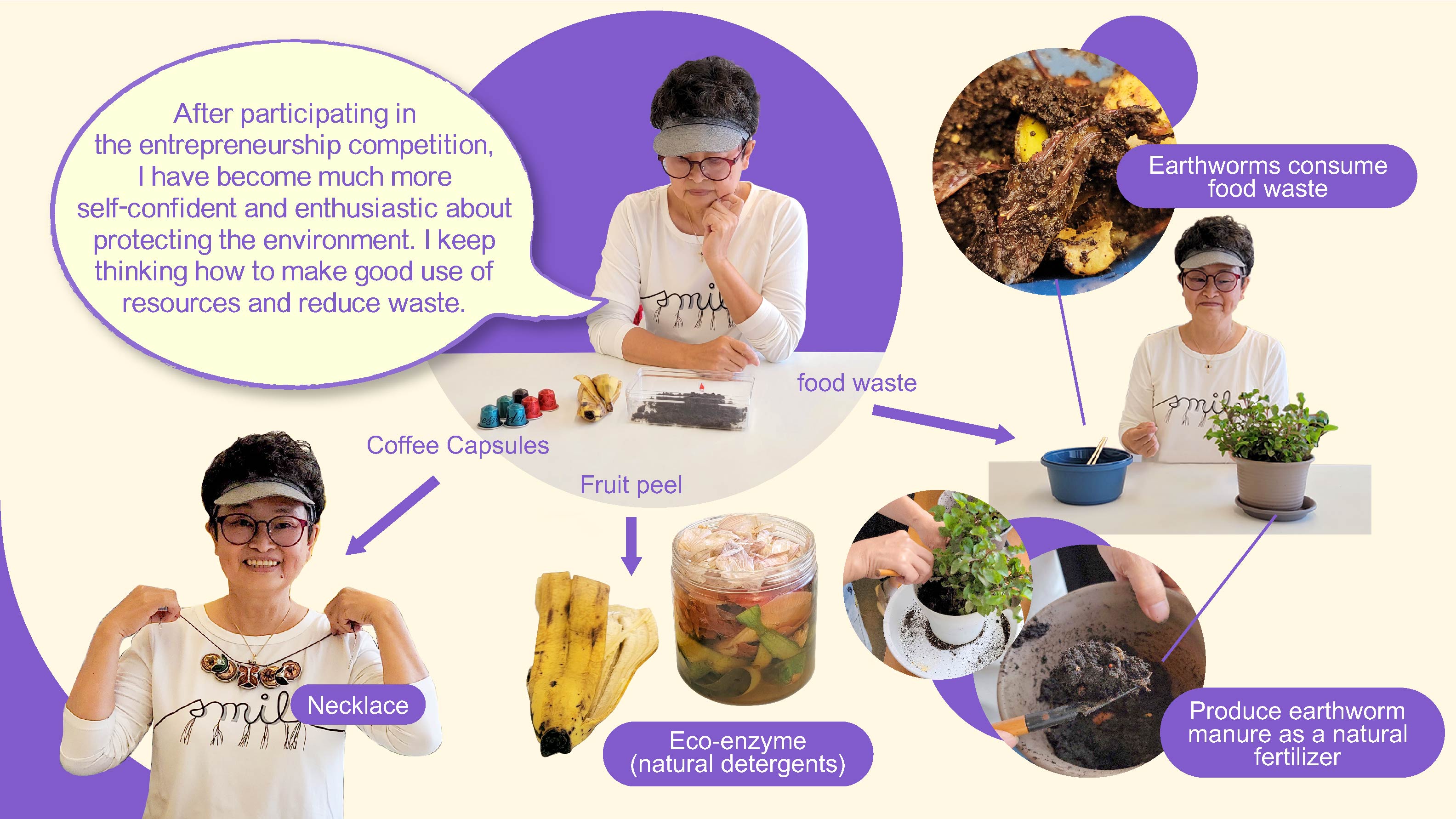 Disputes within the team: the main difficulty in operation

The team had to carry on with the project and complete 20 tasks upon receiving the prize. There were other team members that withdrew from the team later on, and only Cat and another team member keep going. “We did not know each other that well before starting the project, that’s why it was difficult to work together,” Cat said. This was the most challenging part of this project for her.

In the process of collaboration, the team tried to set up a profit distribution system according to workload and efforts they contributed to the project; and would receive the profit in proportion. However, this still did not solve the tensions between the team members.

There are only two members left in Cat’s team now. Their main purpose is no longer selling earthworm breeding boxes but giving talks at different institutions and selling earthworm manure fertilizer and saplings grown organically.

During this collaboration, Cat encountered many problems like conflicts and withdrawals. The team morale was low because the team leader did not know how to solve the conflicts between the team members. However, Cat said that she had no regrets about participating in this innovative program; and she still enjoys working together with young people.

Cat believes that there will be certain challenges for different generations working together. For example, young people are less experienced and need more time to try out things; but older team members refuse to listen and let go, and insist on their perspective, then there will be difficulty in achieving consensus. The important prerequisites to successful cooperation with young people are appreciation and valuing each other’s strengths.

Looking forward, Cat said that it honestly is quite difficult for the business to expand further. First, it takes a long time to handle earthworm manure. Second, they need to design a beautiful package, but they cannot set the price too high. They have not worked out a more profitable operating model yet, so they mainly focus on educational promotion now.

Cat did not know they needed to meet so many conditions and terms to get the prize of $50,000. She suggested that all the conditions and terms should be explained in advance if the organiser is going to conduct similar events in the future. However, she agreed that such competitions are helpful for those who are interested in creating their entrepreneurship. For example, the training workshops are beneficial for new entrepreneurs to have better thinking and organization skills, and a better understanding of what kind of business they are suitable for.

Learning tirelessly and striving for innovation

After participating in the entrepreneurship competition, Cat has become much more self-confident and enthusiastic about protecting the environment.  She keeps learning new skills related to environmental sustainability. Breeding earthworms was only her first step in developing her interest in an eco-friendly lifestyle. In the past few years, she has learned to make eco-enzyme, by turning fruit peels into cleaning detergents and fertilizers. She has learned to grow potted vegetables and turn them into beautiful bouquets. She has also learned to “upcycle” waste into exquisite handbags and accessories. Cat has been building her recycling production chain gradually, and has become an instructor who teaches upcycling handicrafts to promote the message of environmental sustainability as well as inspiring other people.

“I like the idea of innovation. I like to create new things. Learning can push myself to go further and further.” This is the motivation for Cat to keep learning tirelessly. 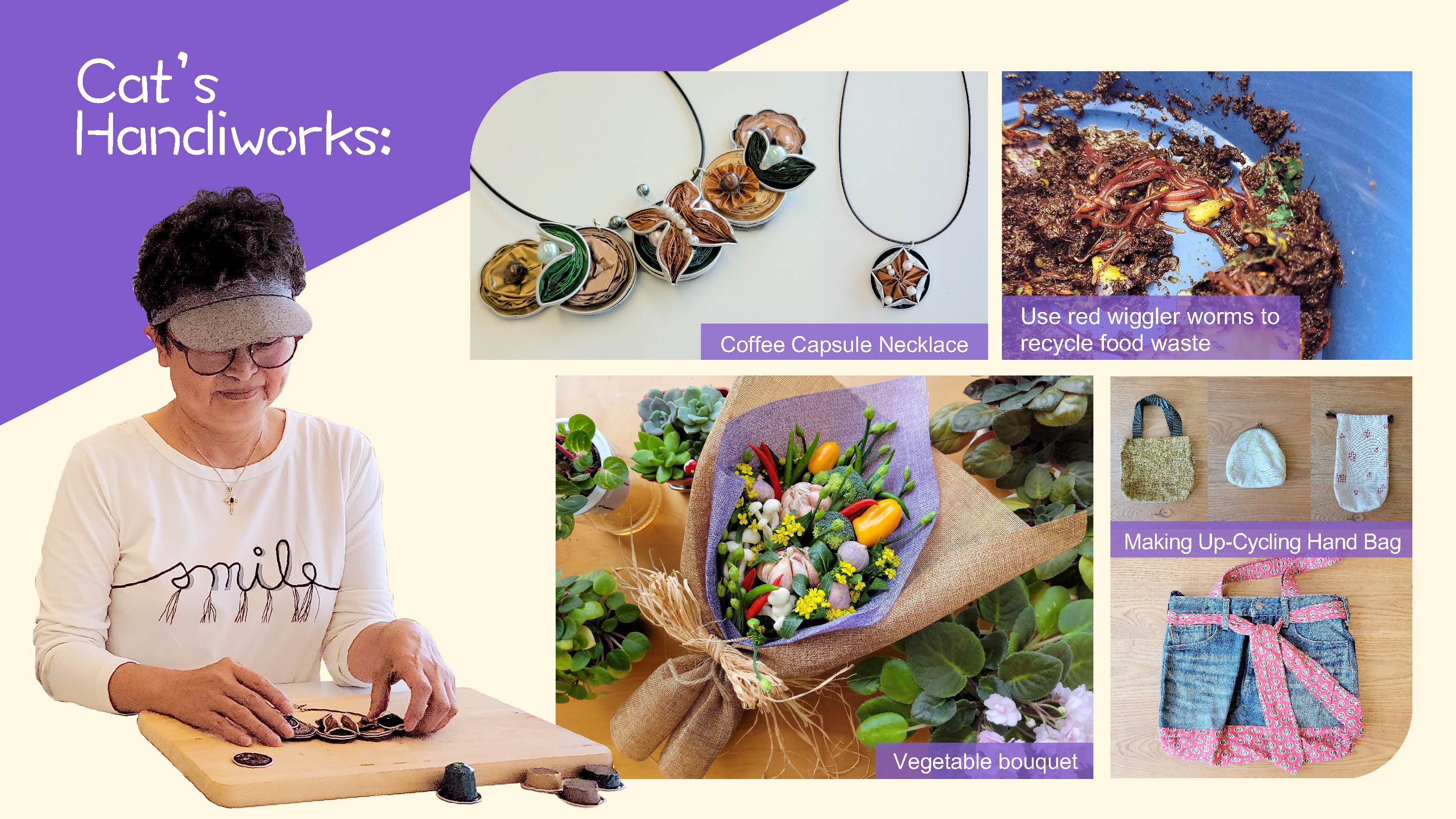