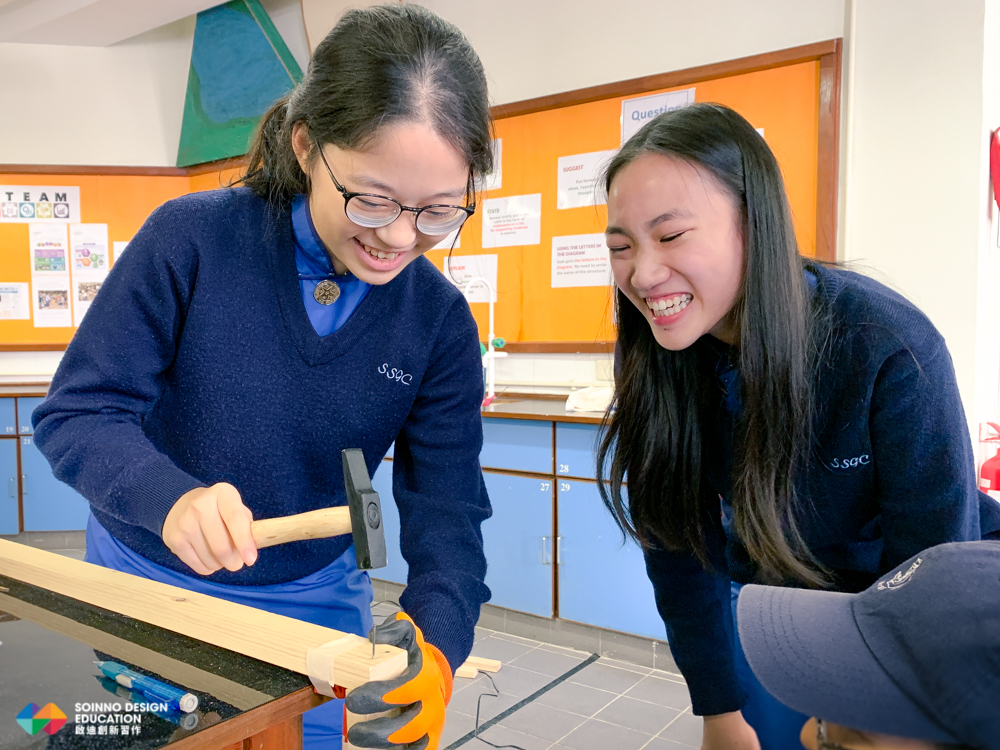 Design Making is one of the three major blocks of SoInno Design Education. So what is the importance of making within the framework of design thinking? And what making could bring to learning?

In one of the workshops this time, at the later stage a group of students needed to build a simple wood structure. It was at this point that we realised that many female students actually did not have any previous experience in picking up the hammer to try to make anything. The energy level soared when they were gathering around the wood structure, trying to figure it out themselves. Their enthusiasm helped us to reassure that the female students in high school should have much more opportunity to be exposed to making as a way to learn. Making, as a way to teach and also as teaching contents, in fact has a long gendered tradition in Hong Kong. Until the 90s, it was still the normal practice for high schools to segregate the boys and girls into different craft and practical subjects. The most common way would be, for the same period of time, the boys will go to the Woodwork or Metalwork classes, whereas the girls would go to Home Economics classes. In response to the establishment of the Sex Discrimination Ordinance in 1996, the government has faced this issue while having the education reformation in 2001. The Education Bureau has introduced the new “eight key learning areas”, and included both the Home Economics and Design and Technology into “Technology education”. Now the gender segregation no longer exists, students will take turns to study the subjects within a school year[1]. In the “Technology Education Key Learning Area Curriculum Guide (Primary 1 - Secondary 6)”, the Education Bureau even stated that “having technology education is the right of every student.” 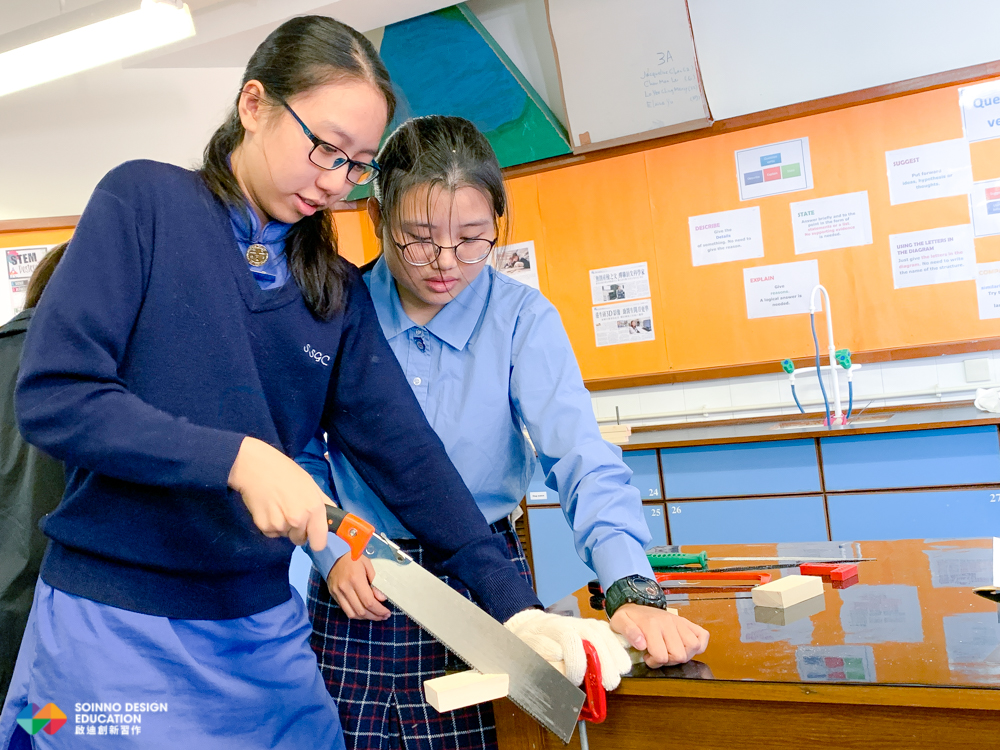 Besides the planning of specific subjects, how the involvement of making into more aspects of learning for every student would require us more attention. In recent years, places in all over the world has all incorporated making into K-12 education. This trend has also come to Hong Kong, with numerous projects such as STEM or makerspaces are now beginning to be setup in many schools. Other than the obvious reason of being seen as an effective way to raise the learning incentive, making education is valued also mainly for its interdisciplinary nature, which is pinpointed to the problems of compartmentalised subjects in K-12 education. Making education is embraced also because of the change of tide of our times, as it is understood that it is now necessary for a 21st century citizen to swift from a consumer to a maker, and also has to learn to solve problem collaboratively. All of these are exactly what making education could provide.

With the base of design thinking, SoInno Design Education emphasises more on making. The reason of this is because of the consideration on design thinking itself. The word “thinking” in DT may be sometimes misleading, having someone to think that it is only a form of formulating line of thoughts. Yet, design thinking should be more appropriately to be viewed as a way of working, so practice is as important as thoughts. Taking prototyping as an example, which is a process that designers create through interaction with material artefacts. The main purpose of prototyping is not merely to text the ideas, but to design through material and in real situation, this process is distinctively different from what is happening on a piece of paper. 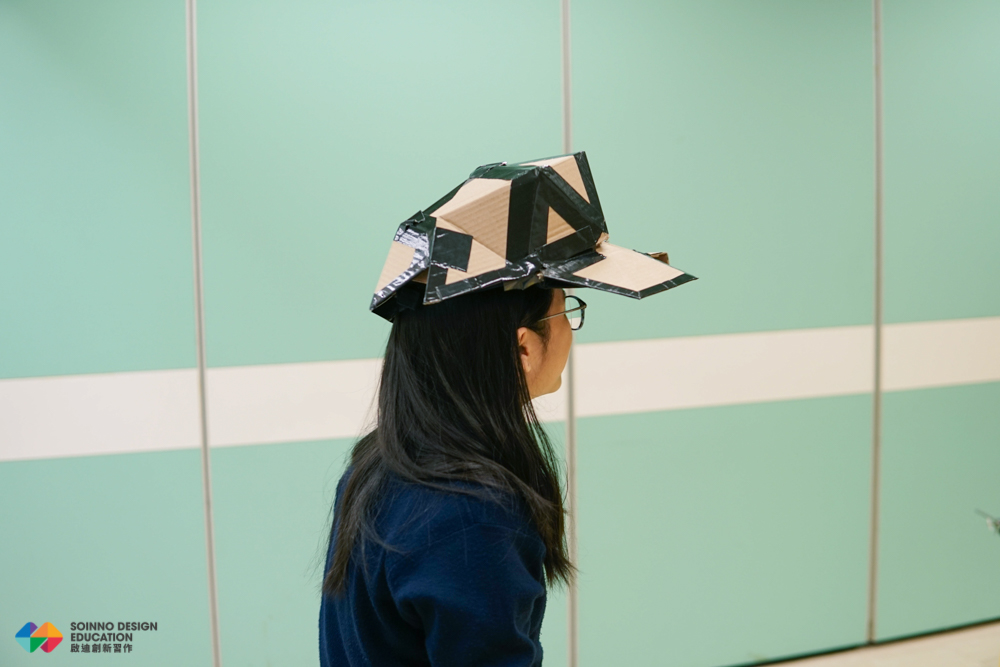 This complies with the suggestion of Constructionism [2]. Constructionism states that the making of external artefacts supports learners’ conceptual understanding (Papert 1993). This time at the St. Stephen's Girls' College, a group of students wanted to make a “co-experience artefact” that they can use to use together with older people. To realise a concept as abstract as “co-experience artefact”, is almost the par excellence design process in praxis. It was only after a long process of experimenting and prototyping with mirrors and materials, that they could have come up with the idea of “delusional hat”. This group of students also got to learn about the difference of moving away from paper and drafts to the materialised experience could make.

As Papert also mentioned, the artefact made by the learner itself functions as an evolving representation of the learner’s thinking. Learning theory has long been highlighting the importance of reflection in learning, affirming that reflection is a crucial link in the chain of acquiring knowledge. Examination and tests are indeed effective tools to show the results of learning, but they are too focused on indicating abilities. The artefacts created by the students in making is instead a concrete and visualised object of reflection, letting the students to be able to “see” and revisit their own learning process.

[1] Second Elimination of All Forms of Discrimination against Women reportp.51 http://www.law.hku.hk/ccpl/wp-content/uploads/2018/03/Research/International%20law/CEDAW%202%20REPORT%20CHI.pdf